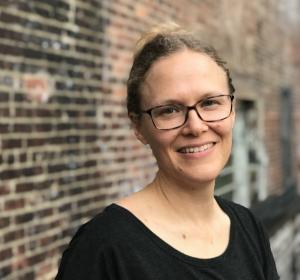 As an historian of modern America, my research focuses on the intersections of gender, race/ethnicity, and sexuality.

I am currently working a book project tentatively titled Collective: How Lesbian Feminists Reimagined Society, about lesbian feminist community-building and alternative economies in the late twentieth century—from rural communes to urban bookstores and beyond. At the same time, I'm co-leading a related collaborative digital public history project. With Prof. Cameron Blevins at CU Denver and the help of student research assistants, we are mapping thousands of lesbian-identified people, businesses, events, and more to analyze the economic, personal, and political networks established in the 1970s-'90s.

My first book, Mahjong: A Chinese Game and the Making of Modern American Culture, explores the American history of the Chinese parlor game mahjong in the first half of the twentieth century. This book follows the history of one game to think about how, in their daily lives, individuals create and experience cultural change. Understanding the complex history of mahjong provides crucial insights into the formation of American ethnic identities, the role of women in transnational consumerism, and the significance of leisure as a source of cultural meaning and identity. ​It won the Pacific Coast Branch Book Award for best first book in any historical subject and was a finalist for the Oregon Book Award in Nonfiction. My work has also been featured by National Public Radio, The Wall Street Journal, South China Morning Post, Time.com, and The Forward among others. I have also published articles about gender, ethnicity, and leisure in The American Historical Review and Frontiers.

At the University of Oregon, I teach courses on women's history, gender and sexuality, queer history, ethnicity and immigration, and consumerism, and I work with graduate students in related fields. Whether taking an introductory survey course on U.S. women’s history or an advanced seminar about gender and ethnicity, students in my courses learn how to employ the intellectual tools of historical thinking, building critical thinking, historical knowledge, and writing ability.

I joined UO and returned to the West Coast in 2018, after three years as a faculty member at the University of Texas at Dallas. I earned my doctorate at Stanford University in 2015, where I worked with Prof. Estelle Freedman. Before beginning graduate work, I lived in Southwest China 2007-2008, teaching English to graduate students at Yunnan University. Previously, I worked in education and social work in Washington State. Originally from Southern California, I first lived in the Northwest when I was an undergraduate at Whitman College in Walla Walla, WA, where I graduated as a history major in 2003.

You can learn more and can reach out on my website, www.amheinz.org.