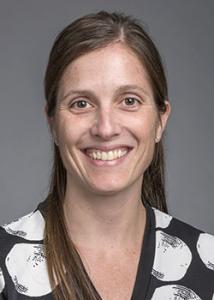 Allison Madar joined the Department of History at UO in 2018. She taught at California State University, Chico from 2015-2017, and before that spent one year as the book review editor of the American Historical Review.

Madar’s research focuses on the history of early America and the early modern Atlantic world with an emphasis on unfreedom and the law. Her book-in-progress—under contract with University of Virginia Press—offers a new vantage point from which to view the tension between Virginia planters’ attempts to create a uniquely brutal system of racialized control over enslaved people while still maintaining their power over a white and mixed-race underclass held in temporary bondage. Analyzing masters’ efforts to craft legal and social barriers between enslaved laborers and temporarily bound servants, Madar reveals the interconnectedness of racial mastery and class-based systems of power. By examining the lives of thousands of servants in eighteenth-century Virginia, she illuminates how white masters deployed both statutory law and networks of social control to maintain power despite providing their servants with legal protections and avenues to freedom that were never available to the enslaved. Although the form of unfreedom experienced by servants was undeniably distinct from and less brutal than racial slavery, Madar argues that it is impossible to understand the historical development of white mastery without understanding slavery and servitude together.

Madar is the author of “‘An Innate Love of Cruelty’: Master Violence against Female Servants in Eighteenth-Century Virginia,” in Order and Civility in the Early Modern Chesapeake and a History Compass essay titled “Servitude in the Eighteenth-Century British Atlantic: Old Paradigms, New Directions.” Her work has been supported by fellowships from the National Endowment for the Humanities, the Mellon Foundation, the Gilder Lehrman Institute, the William Nelson Cromwell Foundation, and the John W. Kluge Center of the Library of Congress.

Professor Madar teaches undergraduate and graduate courses on Early America, the Revolutionary Era, and women, gender, and sexuality in the Atlantic World. She also regularly teaches HIST 290: The Historian’s Craft and the first part of the United States History survey.